I usually don’t talk about what I do for fun (like I have much time for “fun” anyway), but I think so much of my personality is tied in with my hobbies that I need to bring my “free-time” activities into my blog. The first one? Gaming. 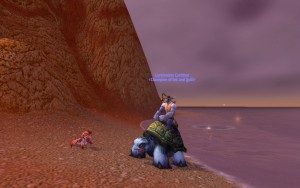 Cerithan out on a fishing holiday

My gaming experience is made up of years of playing consul, computer, and table-top games (please see the “About Me” page to learn more about the specific games I play). For the past few years, most of my gaming time is spent in Azeroth (or for you non-gamers, World of Warcraft). Since the expansion for World of Warcraft — Warlords of Draenor — is due out in November, I have decided to update my Night Elf druid, Cerithan, gear-wise and play him as my main for the next expansion. In fact, I think I may end up maining my druid for the foreseeable future. I enjoy the druid play style , and I am especially looking forward to the gear itemization changes that will be implemented with the next expansion. For those of you unaware of what that means for a druid, it means druids can change specs and theoretically would not have to change gear, as it should have the both main druid stats (intellect and agility). Druids are known for having to carry two or more sets of gear (versus other classes, which only really need one), so this gear itemization change will not only allow druids to actually play like hybrids, but it will be a huge quality of life (and bag space) change.

Before every new expansion is released, I try to set up a series of goals to finish on the character I plan to main for the next year. My plans for this pre-expansion period?

The bottom line is: I have a LOT to do before the pre-patch drops in a couple of weeks, so I better get grinding.